A six-part series in which writer and broadcaster Jim Henderson reveals his spiritual corner of New Zealand - Golden Bay in Nelson province. It's the place where Abel Tasman's men tried to land 300 years ago and were killed for their trouble. The Dutch captain called it Murderer's Bay and the local have been trying to live down their bloody reputation ever since. They and Jim Henderson know there's really no more peaceful or charming spot in the country.

1) The Marble Hill: (3/10/1976)
Jim grew up on a rough remote sheep farm right at the top of Takaka Hill. But the most distinctive product of the family estate wasn't sheep. It was Wellington's Parliament Buildings
Producer: Paul Leach

2) Pets and Other Friends: (10/10/1976)
Every day Edna McCallum takes beef and custard to her tame eels in the Anatoki River. And old coal miner Jess Graham takes peppermints and candies out to Iris 40-year-old pony, now grazing in retirement in the country.
Producer: Paul Leach

3) We Say It with Flowers: (17/10/1976)
Outside a tumbledown cottage in Takaka valley, Jim finds a gnarled old rose bush still producing exquisite blooms and it sets him to thinking about flowers. There has always been a place for them, even in the hard pioneer landscapes of New Zealand.

4) The Stamp Lady of Wainui Bay (24/10/1976)
The tranquillity of Golden Bay today attracts people from all over the country. Among those who've sought peace and quiet there is Enid Hunter, one of the few-New Zealand artists whose work sells by the million and is known by practically every person in the country.

5) The Gold that Abel Missed (31/10/1976)
: In the thundering rush to other parts of the country, it's almost forgotten that gold was first discovered in New Zealand in Golden Bay. By 1857 the hills behind Collingwood were crowded with miners ... New Zealand's first bonanza.

6) Sickle of the South (7/11/1976)
Tasman called it Visscher's Sand-dune Hoeck: Cook called it Farewell Spit; everyone calls it treacherous. The shifting sands have claimed at least 11 ships. But in spite of the quicksands, sturdy four-wheel drive trucks make the 20-mile trip up to the lighthouse safely and regularly. (Final)

JIM HENDERSON, the man whose name was associated with the popular radio series Open Country, broadcast over NZBC radio for more than 14 years, will at last be seen on the medium that hastened the demise of his own brand of folklore journalism.

He's appearing in his own television series, Henderson's Country (starting to-night), which is a look at Takaka in Nelson province, his birthplace, near Golden Bay at the top of the South Island_

Jim, director Paul Leach and the TV2 camera crew spent 12 days filming in the Takaka hills, and considering that he has some terse opinions on television he was pleasantly surprised by the experience:

We clicked as a team - which was bloody good, he says. The thing I don't like about television is that you have to split the decisions, but I must admit we clicked in. Most of the programmes we we haven't much compassion. A bloke who kicks someone's head in gets a minute-and-a-half on television, but the real people -those who haven't got unions or public relations officers - haven't got a voice.

In Henderson's Country he sets out to redress the balance by getting in behind the hedges and talking to some of the people who moulded the spirit of the Takaka hills where he spent the first 17 years of his life on his father's sheep farm_ Where the bitumen ends, Jim's story starts.

We dodged Takaka as being too much of a city. (With its 400 residents.) So often country folk are pic-tured as outlandish or moronic. I'm sick to death of that image. We show them as people who have done something honest. Here is a touch of recognition -no preaching. Just presenting them.

Steeped in the history and lore of the area, Jim Henderson brings to light in this series of six 20-minute programmes, some of its atmosphere through characters such as Enid Hunter, a stamp designer, Joss Graham, an old coal miner or Mamie Andrews, judge at the local flower show. 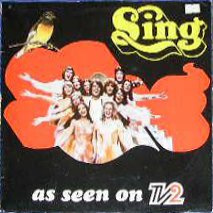