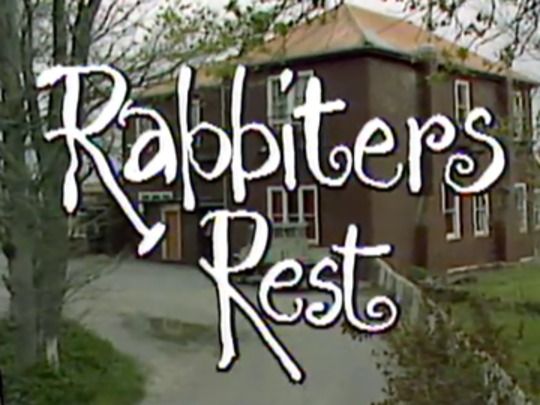 Comedy set in a country pub. 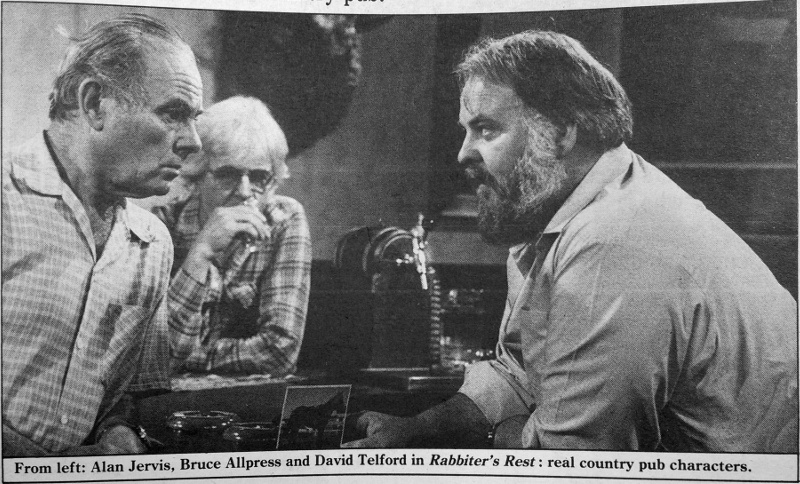 Jon Gadsby has lately had proof of the old adage that truth is stranger than fiction. Some of the storylines he submitted for Rabbiter's Rest have been rejected because “no one would ever believe it happened. Jon". But they were based on true stories.

Gadsby's parents moved to Dipton - a one pub, one post office, one store, one transport company-village in Southland ‘- while he was at university in Dunedin. At weekends and in the holidays he would stay with his parents and work at the local pub. His television comedy Rabbiter’s Rest is set in a New Zealand country pub. “Most of the storylines are based on things that did happen experiences I had or heard about, embroidered a bit, of course. The stories in the programme are nowhere near as unlikely as some of the things that really happened.

“Once these three separate rival bikie gang's turned up. It was Easter weekend and there was some convention on for them in Southland. There’d been about three stabbings at it. Anyway, these guys had been chasing each other all over the place and they ended up in Dipton. Of course, all of Southland empties out over Easter because of the Riverton races, so there were no locals left. And these three gangs arrived. It was really scary.” That one was turned down. Much too farfetched.

“Small-town New Zealand is another world," says Gadsby. “Reading some of the reviews of the first series, you'd wonder whether the reviewer had ever been in a country pub. They’re probably city people who’ve never got further than the wine bar!

As well as his script writing duties, Gadsby makes a brief appearance as a rugby coach in this series. "I based my character on a guy I once knew - an aggressivly competitive coach of a country rugby team" . He's had some ribbing about "creating work for himself!, but Gadsby says he appeared in the show only "because they'd run out of actors" "I mean, I've only got about four lines. If I'd been trying to give myself a job, I'd would've done it properly and written myself a bloody great part."

The style of the Rabbiter's Rest pub and the characters in the programme are are all loosely based on the real thing. The characters are a sort of "amalgam" of people Gadsby knew. The core cast of the first series have returned for the second. David Telford as the axcatictious(sp?) publican Murray - the man with all the get-rich schemes, but not the brains to make them work. Sandra Rasmussen as barmaid Doreen - the bright one in the establishment, though Murray will never realise it. Alan Jervis as likeable but gullible Stan and Bruce Allpress as fellow “regular” Snow. But Billy T James’s wise-cracking Ben won’t be drinking at the Rabbiter’s any more. Other work commitments made James unavailable and producer John Lye felt it was better to drop the character outright than try to replace him. “I didn’t want it to seem like ‘the token Maori’.” Other actors making appearances in the series include Russell Smith, Stuart Devenie, Mervyn Glue, Peter Rowley, Campbell McKay, Sally Kershaw and Liz Moody.

Two directors new to situation comedy had that task ---from a drama background, Ginette McDonald and, straight out of Radio with Pictures, Ready to Roll et al, Simon Morris, whose catch-phrase when attempting to do things he thought would be impossible, “Let’s not talk about it, let’s do it”, is apparently still being bandied about TVNZ in Christchurch.

Lye has produced and directed most types of television programme, but his main project in recent years has been the satirical McPhail and Gadsby. He found Rabbiter’s Rest both enjoyable and interesting work. “It was so different from McPhail and Gadsby, which is really current affairs with jokes, so you’re working under the same sort of pressure of time as a weekly current affairs programme. And there are other limiting factors too, like in casting, it’s really who’s in the right place at the right time and looks or sounds like the right person. With Rabbiter’s Rest we could plan everything and cast carefully, and then have the luxury of four days rehearsing and building characters, not just a quick read through.”

The interior scenes for Rabbiter’s Rest are performed in front of an audience at the James Hay Theatre, twice each night with two different crowds. What we see on television is the best take of the night or an edit of the two, with outside location scenes added in. The live audiences get to see the non-stage scenes on a video screen.

For exterior shots of the pub itself in the first series, the Springston Hotel iust it of Christchurch was used - compete With phony Rabbiter’s Rest sign. When the second series came around the Hotel had renamed itself Rabbiter’s Rest and changed from brown to cream. The opening titles of the old series had to be cast aside in favour of new ones featuring a cream Rabbiter’s.

Lye says that Christchurch people know the series is about their district and happily get involved with it. “They turned up in droves as extras when we had to do a wedding scene. And they point out any mistakes they see.”

Lye admits it’s not a new idea to set a sitcom in a pub: “The Americans have Cheers and I’m sure the British have done one. But in every country, the pub reflects the style of the people. What makes Rabbiter’s Rest unique is that it is set in a New Zealand pub.”

And does he think Gadsby’s stories are far-fetched? Not at all. “Situation comedy doesn’t have the same kind of reality as drama. With their local programmes, New Zealand audiences seem to have trouble remembering that situation comedy is meant to be funny. It’s meant to be far-fetched. “We’re only about 80 per cent as unbelievable as Fawlty Towers, for example, which is totally over the top. But that’s from Britain, so it’s all right.” 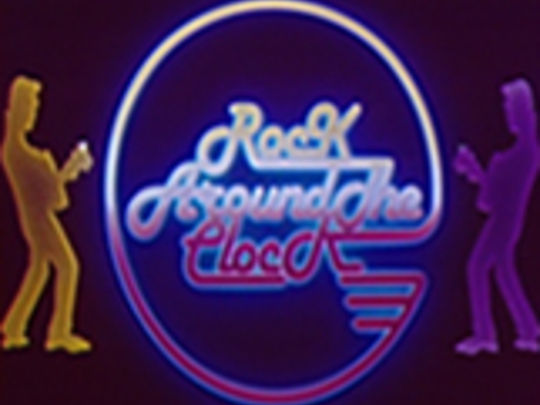