Actor as well as a Film and TV writer and director. Kiwi TV credits include Worzel Gummidge Down Under, Erebus: The Aftermath, Hunter's Gold, Moynihan, Section 7 and many others...

It's a Mug's Game 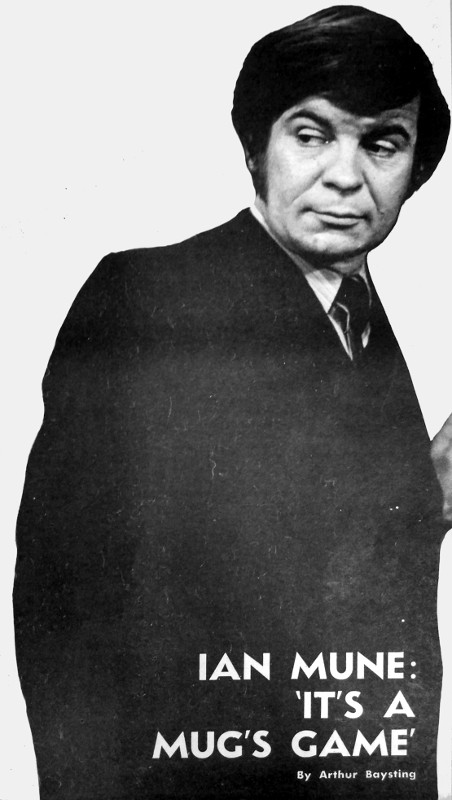 One of the most romantic ideas about the theatre is the notion of the travelling players They'd give a performance and dazzle the audience and in morning when the people were looking for them they would have gone - disappeared. lt's this chameleon - possibly even charlatan quality which is one of the excitements of the business

Some of the chameleon quality Ian Mune talks about seems to have rubbed off on him. His first appearance was in a religious programme for Northern Television entitled And Then There Was John. The next time viewers saw him was as Rod - a greasy lout with long hair and his navel hanging over his belt - in an episode of Pukemanu

Currently he is on screen in what for him is a relatively straight role - Probation Officer John Sitwell in Section 7 -- but since this was filmed his image has undergone another transformation. For his role as a villain in Rangi's Catch, a children's film for the British Film foundation, he has donned convict grab, grown a weeks stubble on his chin and has had hrs head shaved virtually down to his scalp. Directed by Michael Forlong, the film will be shown in British cinema clubs as a six part serial and distributed a full length feature. Location shooting has just been completed in the Marlborough sounds and after finishing up in Rotorua Ian moves on to his next stint - an Edward Bond play at Wellington's Downstage.

The role of John Sitwell was quite a challenge for him, mainly because of the short 30 format for each episode There are very few long scenes in the series he says, and it's very difficult to get into stride.

It's a pity in another way too because so many interesting themes crop up and you haven't got time to go into them and explore them properly. But I'm very happy with the series. I like the character so that helps. I think it takes a few episodes for him to get going but the series gets better as it goes on

Ian's first acting part was in a school play in Tauranga where he took the part of a lion - because i roared louder than anyone else. He left school ad worked for NAC for a time but then enrolled at Victoria University where he says he fell in with a bad lot and became involved with Theatre Unity and Downstage.

With only a P.A. year to do to get my teaching certificate I was offered a job at Downstage which I jumped at. he recalls. I swept a lot of floors, cleared a lot of tables, designed posters, acted and generally worked about 80 hours a week for 6 pounds.

He then toured with Comedy of Errors which was directed by Gareth Morgan from Stratford. Morgan went back to direct the Welsh National Theatre Company and he wrote over asking Ian to join him. He was already on an internal grant from the Arts Council and they extended this to an overseas grant. He took his wife and two children over and spent so much time touring Wales that he got to know the county like the back of my hand

This was touring in little theatres and schools. There are some beautiful pubs in Wales but not many good theatres - although the Carwyn James theatre in Carmarthen is and exception.

One play he particularly remembers doing was entirely in Welsh dialogue. I didn't understand a word of it, he says, but I had to make a wax dummy of one of the characters. I had the delightful job of covering this young lady in Vaseline, putting plaster of paris bandages on her, then tearing all off - along with a good deal of her bodily hair - and making a latex dummy

Back in New Zealand he designed and produced America Hurrah for Downstage and went to Auckland and joined the Mercury Theatre. He produced Jenny McLeod's Earth and Sky for the Auckland Festival and designed, taught and acted for the Mercury.

Last August he left the Mercury and since then his free-lancing has kept him busy, although he refutes the notion that it's an easy life. In a way it's a mug's game. The whole thing about free-lancing is that you've got to get out and chase bread, he explains. A regular job is lovely - people get all sorts of benefits like holiday pay, sick leave, superannuation and so on. I get none of these but I have to take care of every one.

From mid-December to the end of January there's virtually no work for an actor and that's six weeks every year you have to be prepared for. I can take my wife and kids away at Christmas if I've had a big job just beforehand.

Despite the sometimes precarious nature of his job, his wife Jo and two children aren't complaining. In fact Brendan, his elder child, is determined to be an actor. He and Nicola, who is, five, act out scenes in the bath, Says Ian And Brendan sees nearly every performance of every kid's show I do. And he's got a terrific memory for scripts. I keep telling him he's a mug but he's adamant about acting when he grows up.

As well as acting Ian finds that latterly he's become more and more interested in writing. Last year I wrote a children's play called Pinnocchio's Travelling Circus he says, containing a good deal of improvisation - something I've very interested in. It was performed by Frances Batten's mime troupe, Theatre Action and had a very successful season at the Auckland Independent Theatre. I then submitted the script to the NZBC who, after some adaptation, purchased it for Television. He is at present working on a television play and a film script - though he's not sure if they will sell.

But acting remains his consuming interest. There are many parts he would like to play, particularly Shakespearian, where he says the physical and emotional demands mean you are working at a peak.

All your perceptions and your instincts - sight, timing, rhythm and so on, have to be spot on. If you're playinga very fast game like table tennis and you loose the rhythm then you miss, and it's the same with acting. But when you're high as a kite it's incredible. For me the thing about acting is that, hopefully, you're working with good prose and good material - and if you're working with good material then it's like driving a really fast car or having a good meal. I would like to play Hamlet, obviously. Then there's Richard II, Malvolio, Oedipus. I really enjoyed the part of Iago in the Mercury's Othello last year. And I'd like to play a good part in a Ken Russel film.

He finds television work exciting in a different way - it is technically very demanding and there is a tremendous satisfaction in ding a job well. And he is enthusiastic about a tentative sequel to Section 7 which, if it comes off, will centre more on the character of John Sitwell.

One is conscious of television stereotypes all the time, he says. I should think one of the reasons - apart from perfidious bloody nonsense of shows like Braken's World and Marcus Welby - is because the little box is such a voracious monster. It takes a lot of time to conceive, script, re-write and produce a series. And at the end of a lot of work you've filmed 30-minute slot, which isn't even an eighth of an evening's viewing. So everyone's finding ways of turning more and more, faster. This is why you have a show like Skippy. People have been buying something for 15 years and they'll buy it for a lot longer - and soon it'll be the next generation watching it. I find it disheartening to think that's what people are really interested in. I hope it's not - but in sells.

In the programmes done here I think there is an honest attempt to treat subjects seriously. I think New Zealand endeavours to make a fairly honest sort of TV drama.

Ian, who began his illustrious TV career over six decades ago, will be presented with the award at the New Zealand Television Awards on Tuesday, 1 March in recognition of his contribution to the New Zealand screen industry.

An impassioned advocate for telling homegrown stories, Ian has brought an authentically Kiwi voice to New Zealand screens. With more than 100 screen acting, writing and directing credits to his name, Ian has been a constant presence in our performing landscape, earning a raft of accolades throughout his career, including being honoured with an OBE in for services to Film and Theatre.

Ian went on to co-write Kiwi cult classic Goodbye Pork Pie and embarked on an impressive career directing films, making his directorial debut with the multi-award-winning conman caper Came a Hot Friday (1984), followed by New Zealand Film Award-winning films The End of the Golden Weather (1991) and The Whole of the Moon (1996). Other directorial triumphs include Once We Were Warriors sequel What Becomes of the Broken Hearted? (1999) – a film that won nine NZ Film Awards, including Best Director – and Ian’s first documentary, Billy T: Te Movie, exploring the life and comedy of Billy T James. Ian’s TV directing credits include drama series The Tribe and Mercy Peak.

Concurrent to his directing endeavours, Ian continued to act. He took home the Listener Film and Television Award for Best Male in a Dramatic Role for his starring role in TVNZ’s 1987 mini-series Erebus: The Aftermath and, in 1994, the prolific actor took home another New Zealand Television Award for his turn as Prime Minister Sir Robert Muldoon in mini-series Fallout. Ian has appeared in many New Zealand feature films, including A Song of Good, Savage Honeymoon and I'm Not Harry Jenson, and played Winston Churchill in US telemovie Ike: Countdown to D-Day and Buster Keaton in CBS’s Lucy: The Lucille Ball Story. More recently, Ian has starred in TV dramas including Agent Anna, Burying Brian, Wanted and The Pact. 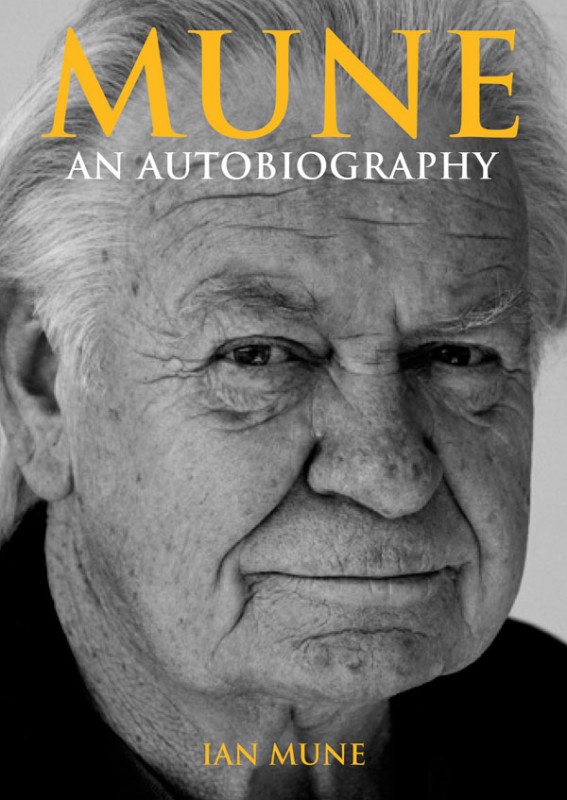 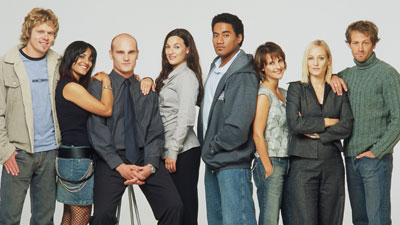